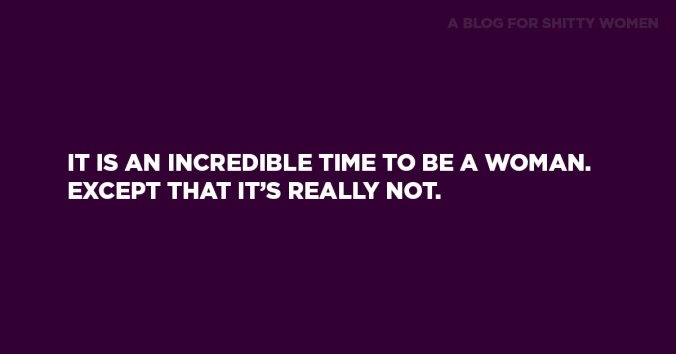 (This blog will take the average adult reader approximately 5 minutes to read.)

I have a long history of judging other women. For what they wear, for what they do with their lives, for the way they handle their emotions, for their interests, for their hobbies—if there’s a thing that women do, or are, I’ve probably judged a woman for it.

This blog is the pot calling the kettle black.

We’re at a weird point in history.

There’s this giant part of society that is openly and vocally pro-woman. This part of society is made up of both women and men. They are anti-all the things that have demeaned and frustrated women for centuries—like rape, misogyny, body shaming, judgmentalism, and those tiny fucking joke pockets that lady pants come with. I must say—no matter what you think of her, I think it’s quite amazing that we have a woman who may well win the White House. Fifty-some years after all women got the freedom to vote, we’ve got one about to lead the country for the first time in our country’s 238-year existence. (All women may have been granted the hypothetical right to vote with the 19th Amendment in 1920, but not all women had the freedom to vote until the 1960s.) It is an incredible time to be a woman.

Except that it’s really not.

At the same time as all this pro-woman stuff is going on, the internet has given way to surfacing exactly how anti-woman our society is at its core—and this is an indictment of men and women. We’re all quite fucked up, frankly. The internet is a huge part of society today, and as a woman on the internet, I must say, this place is misogynistic AF. I’ve been sharing some opinions on my Facebook page lately—and on some of them, I’ll switch the privacy setting to “public” so it can be shared. Inevitably, some crusty turd man will feel the need to step in and explain (or “mansplain”) what they think I should mean. Comment threads are a shittastic place for women—I recently got called a “fucking cunt” in one—then when I posted to Facebook about it (and the three instances of sexual harassment and one instance of sexual assault that I experienced in one week), a man decided he needed to explain the difference between sexual harassment and assault to me as if women don’t fucking know the difference. It is our life. Then there’s porn—the unbelievably huge portion of the internet that boasts in abuse of women and promulgates and perpetuates deep seated misogyny in our culture. The statistics and research about porn consumption are staggering.

And on top of all that—there are women. Who, as I’ve previously stated, are the worst. And that includes me. Whether we like to openly admit it or not, most women have some serious chips on their shoulders when it comes to other women and sociocultural notions of womanhood. It’s a weird catch 22 wherein we tend to judge the women who are unlike ourselves, resent the ones who seem to be womaning properly (or at least better than us), and then judge ourselves when we fail to measure up to the notion of womanhood that is thrust upon us by the society and culture around us. And when we see women succeeding at meeting said womanly standard where we fail, we resent, we grow bitter, and we judge even more harshly. Sometimes it seems like women cannot catch a fucking break—not from men, not from each other, and not even from ourselves.

I write that allegation both out of my own personal experience both as the judger and the judged, and out of a giant pile of recent conversations with women who are fed up with being fed up with women.

Short of the rally cries of feminism, I’m fairly confident that I’ve never heard another woman communicate that she thinks other women are great. I am, of course, drawing this conclusion from anecdotal conversational data, but I’m fairly well convinced that the vast majority of women think women are the worst. And honestly, I think those rally cries of feminism are bullshit, and I’ll tell you why: Because the women who use them (myself included) will loudly and proudly spout pro-woman sentiments while silently (and sometimes not-so-silently) judging the women around them for every thing that doesn’t measure up to their own fucked up standard of womaning. We see “woman” as a concept—powerful, amazing, perhaps if you’re Christian like me, divinely created with specific purpose and unmeasurable worth—but fail to see the woman right next to us waiting for the bus as that. Her? She is annoying. In my way. Caddy. Sloppy. Too perfect. Clumsy. Ditsy. Too emotional. Not emotional enough. Too bubbly. Too morose. Certainly not the woman that our rally cries are about.

(PS. This shit is the root of a whole hell of a lot of gossip among women, about women.)

I think it’s high time we got openly honest with our shittiness. I don’t believe that we’ll be able to instigate any sort of real, deep, permanent, cultural and social change until we confront the judgmental (misogynistic) skeletons in our own walk-in closets.

Confronting those skeletons is an upstream, active, continual, here-and-now process. It means letting go of the faux-womanly standards you’re holding the woman around you to. It means letting go of the faux-womanly standards you see yourself failing to live up to—as they beget resentment and bitterness. It means confronting the thoughts that surge in when we see women appearing or acting in a way that frustrates—in that moment. It means taking thoughts about the women in your life captive—whether you know their name, or you’ve just crossed paths by happenstance. If we are passive about this process, it will not happen.

Until we believe—and act out of response—that the woman next to us matters and is worth dignity and respect, no matter how different from us she may be, we will never have a truly credible “women matter” voice. We are the gag in our own mouth.

As I was playing with the idea of starting this blog—and what to name it—I thought through a lot of concepts. I prayed through a lot of ideas. I landed on “Shitty Woman (and other shitty people, too)” because it felt fantastically unifying—we all identify as it, and we all identify others as it. And it is my hope and prayer that somehow, by sharing my own shit, that this army of Shitty Women (and other shitty people, too) can repent of the ways we deny Imago Dei in others and ourselves and learn to deeply love one another—despite our endless differences.

2 thoughts on “Women are the worst.”