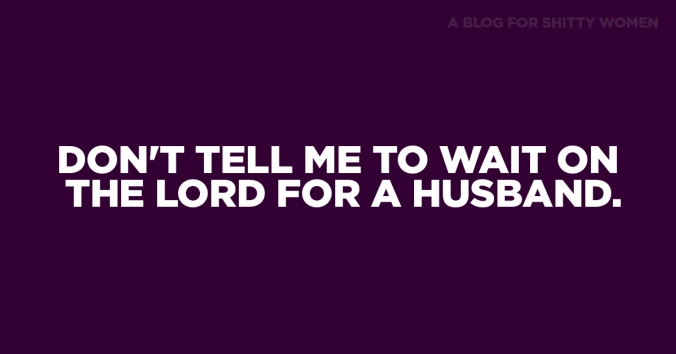 This blog will take the average adult reader five minutes to read.

This specific blog post is geared toward single Christian women—whether you fit those descriptors or not, you’re welcome here—but I’m going to be writing under the auspice that my primary audience is women who are single and are Christian. Please forgive my Christianese, at times—and if you choose to keep reading, and want any explanations/translations, please let me know.

Christian. Woman. Single. (In that order.)

I want to get married someday. I want to have kids. And I wholeheartedly believe those are good desires. When I was in my early 20s, I thought I’d get married around 25—then when I got to my mid 20s, I decided 27 sounded like a good age to get hitched. Then 28 rolled around. And 29 passed by. And now 30 has passed by, too.

The people who know me well can attest to the fact that I speak about relationships less than your average single adult (Christian) female. I don’t like breaching the topic. It’s disappointing, depressing, and quite frankly—I never saw much hope on that front to begin with. (But that is an entirely different blog for an entirely different day.)

I did not grow up in a church where being married was the end-all-be-all of womanly existence. Or maybe I did, and I was too busy being totally aloof to notice. I got my first glimpse of the expectation that I was supposed to be spouse-hunting the year I graduated from high school and moved to Port-au-Prince, Haiti. Suddenly, I was surrounded by Christian women, older than myself, who had all these notions of what attracting a husband might be like. “How do you ever think you’re going to attract a man with rough feet?” one of them asked me, after I declined her invite to get a pedicure (uh—because I didn’t know what the word meant). (Like, shit, lady. I’m 18 and I didn’t know men were so picky about foot texture.) Then one of them told me that I might be able to attract the boy I was interested in if I dressed more femininely—in this context, I think “femininely” might’ve been Creole for “more cleavage”. (But, you know, this is Christendom—so only Godly cleavage.) I was shocked that this was a thing—like—actually putting great deals of effort into tricking a man into falling for you by having soft feet and modestly exposed boobs.

Boy, was I in for a rude awakening.

I left Haiti and went to Liberty University—a conservative “Christian” institution of higher learning (or something like it). It was literally hours after I arrived when I first started hearing widespread conversations among women about finding their husband at LU. “Ring before spring—or your money back!” (PS. The money back part is a crock of shit. Eight years after my final spring, I still haven’t received my check.) Like—no fucking joke—within 24 hours, a supermajority of the women I had met had already found someone to have a crush on. And to some extent, for a while, I bought into it—mostly because I was in a totally new place in a totally new culture without knowing a single person, and I wanted to fit in. I wanted to have something to contribute to 2am dorm room conversations.

I never dated while I was at LU—but I spent countless hours with girls crying on my dorm room floor because a relationship didn’t pan out—again. Some of them were duped—again—by the “God told me to pursue you” line. Some of them blinded by the men training to be pastors—thinking a man who was training to be a pastor could never also be a giant fucking dick. (Spoiler alert: They can be.) Some of the women were—uh—part of the problem. I don’t think I’m allowed to call them “psycho” in today’s appropriate feminist lingo, but dear God above. (Mind you, I was in university during the advent of Face-stalking. And girls are creepy, too.) Granted, I also think it has been deeply engrained in many Christian woman that we are worthless without a man—so if a woman is going psycho over trying to find a man, I’m inclined to believe that she believes that lie more than she may be willing to admit.

And while in my current station, the married-or-worthless mentality isn’t quite as invasive—pervasive—oppressive—there is still this weightiness to female singleness in Christendom that speaks lie upon lie upon lie to those of us who are not-yet-wed—or maybe even never-to-be-wed. Lies that say, “You are not whole.” or “You’re missing out.” or “You’re not good enough.” or “Something is wrong with you.” or “You’re not as Godly a woman as a married woman is.” or “You’ll never fulfill your purpose until you have children.” or “You’ll never really know what love is until you’re married and/or have children.”

Sometimes being an unmarried woman in the church feels like being a C-team Christian—like there’s this hierarchy that leaves single women dead last (or perhaps second to last, just before children). Like women with husbands are wiser. Like men without wives are still yet wiser than single women—and men with wives are the wisest of them all. Like the Holy Spirit can’t speak through me as well as he can speak through a married woman—or a man. To all of that, I throw both of my middle fingers in the air and use my best lady-tyrannosaurus roar to proclaim FUCK. THAT.

Back to the weight…

There is an immense, often crushing, pressure to pursue marriage within the church—and as I mentioned earlier—I don’t think that’s a bad pursuit. But when that pursuit consumes your thoughts, and calls your worth into question, and your prayer life becomes begging God for a spouse, something is amiss. Something is terribly fucking amiss.

I honestly believe the church has done women—specifically single ones—a huge fucking disservice teaching by word and by action that we should be pursing marriage instead of Jesus—and usually this is masked under “pursue Jesus and he’ll give you marriage”. I cannot count the times I’ve been told something along the lines of, “Just be patient. Wait on the Lord. He’ll provide a husband.” Like—what if he fucking doesn’t? What then? Someone fucking tell me what to do then because I have never heard that message in the church.

Or maybe this time it’s the ever-used “It’s just not your time yet.” No shit, Sherlock.

But I—me—Christian. Woman. Single.—am equally saved by grace and equipped by the Holy Spirit as every other Christian.