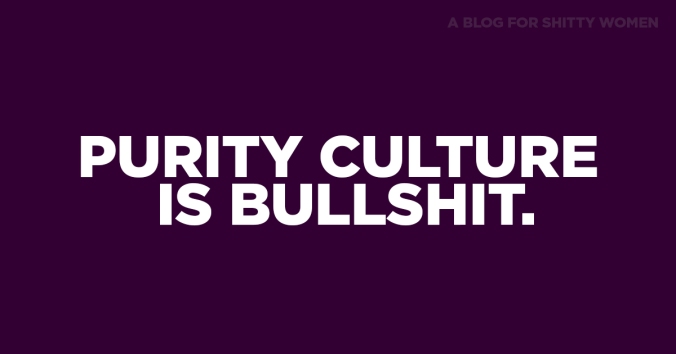 There are 1511 words beyond this point. This blog will take the average adult reader about 5.5 minutes to read.

Then there was the year-round Purity Culture—with purity rings—and books like, “I Kissed Dating Goodbye”—and a plethora of other Christiany things that basically defined purity as something that comes from oneself and directly correlated to one’s involvement with another person’s genitals. There were endless talks about “I’m saving myself for marriage”. The chivalrous men who thought they were doing something extraordinary by not manipulating their committed-to-purity girlfriends into having sex with them. The “we only made out a little—he didn’t touch me anywhere sexual” statements. (I definitely could be wrong—but I’m pretty sure your whole body is “sexual” when you’re making out.)

(For the non-Christians reading this, yes, Christian culture is fucking weird. Please, as difficult as it may be, try to not confuse Christian culture with the grace of God through Jesus Christ. They are very, very different things.)

I never wore the white shirt. Not because I wasn’t a virgin, but because I never felt pure—always a little too dirty, a little defiled—by others and by myself—a little too ashamed for “Purity Day”.

I’d heard a people talk about how Jesus makes us clean—how he knew the sins of the woman at the well, and saved her. But that wasn’t my story. I haven’t had multiple sexual partners—I never understood how it applied to me. My story was far more centered around abuse and my own lust. And by and large, the purity narrative told was “Jesus saved you so you don’t need to do that anymore.”—and that’s how post-sex purity worked. The act of making one pure was attributed to Jesus—but the act of staying pure was on your shoulders. My shoulders. And if you had never had sex outside of marriage—you got to take all the credit for your own purity. By the standards of Christianese purity culture, I was pure. But I knew I wasn’t.

(I want to stop here for a moment and clarify the above “abuse” statement. I’m intentionally vague. I’m vague because this blog is public, and if anyone who was involved is reading this—I want them to see the grace of Jesus—not their shit blasted all over the internet. If you can avoid it, please don’t make assumptions. Your assumptions are probably extraordinarily wrong.)

Purity culture left me feeling hopeless and alone. It left me confused and isolated. It made me question, “Why do I feel so dirty—disgusting—defiled, if I’ve measured up to these certain standards?” It silenced me—because there’s really no space within purity culture  Christianity for a woman who struggles with lust to speak. (And outside of religion, there’s not really a place for someone who identifies lust as problematic—but that’s probably another conversation for another day.) It silenced me—because even though I was experiencing many of the same emotional issues that abuse victims did—I didn’t have a stereotypical abuse story—and I didn’t know how to even start that conversation, or even if there was a conversation to be had. Purity culture said, “What you experienced wasn’t abuse.” and fed the beast of a lie that I’ve been at war with since childhood, “You don’t deserve to feel that way.”

So, like every good Christian, as I was walking to church one Sunday, I bargained with God.

I told him, “I will confess, if you explain to me why I feel this way first.”

The sermon that day was largely about sexual abuse—and how Jesus cleanses all defilement—whether you’re the abused or the abuser. Pastor Mark defined sexual abuse in a way I had never heard it defined before—and all of a sudden the things I knew I had experienced, but did not think of as abuse, were recategorized. Ok, I have been abused. But more than that, these tiny memories that I had and never quite saw fully or understood—akin to looking through a pinhole at them—were opened up—and I saw in full-frame some of the rather horrific things I had been present for.

God held up his end of the deal—so I held up mine—and later that week I approached some women who I knew I could trust—and confessed and began the ongoing process of repentance and forgiving in the areas that required it. And it was absolutely liberating. I had grown so accustomed to carrying these emotional anvils around with me—that I forgot what it was like to be without them.

I was met with grace. I was met with mercy. I was met in that moment by the Holy Spirit—who provided comfort and safety and freedom. I was met by women who were willing to sit in my shitheap with me, and point beyond the shitheap saying, “I love you, but more than that, Jesus loves you—and has forgiven you—and has cleansed you—and can take this shame from you.”

Mind you, this wasn’t a one-and-done situation. Yes, weight immediately lifted from my shoulders—but I’m still sometimes tempted to pick that weight up again. I forget whose I am. I learned over the course of that season that my purity has very little to do with me. It is a constant washing. It is present imperfect (and at the same time still somehow perfect). Already—not yet. It is still happening. I am not the source of my own purity—and I never will be—but I get to choose to trust daily that I am continually being washed. And when the onus for purity is removed from my hands and shoulders, it becomes actually accessible—like a toddler who fell in a mud puddle—that toddler can’t fully wash itself without help, and really, he or she will probably just wind up making a bigger mess. The toddler needs someone who cares for him or her to do the washing. I know now when I find myself mud-caked, that I can stretch my arms upward and be welcomed back by my Father every single time.

Over the years that have passed since that season, I’ve thought much about why I was held captive by that for so long—the shame, the guilt, the weight… not just of the things that I had done, but things that I had no control over—things I did not choose for myself… and the more I questioned it, the more I came back to this notion of purity culture over and over again.

If the lies I believed about my own sin, and others’ sins that have deeply impacted me are the walls of my prison cell, purity culture was the prison complex. From within a prison cell, even if you can see beyond your own cell—there are still walls and locked doors and fences and razor wire and armed guards between you and freedom. It became evident to me that while my prison cell was built out of lies I believed, the next set of walls beyond that was the culture I had spent most of my life embedded in. The walls that said, “Even if you got out of your cell, you’ll never get past these walls.” But—the walls were bullshit. A shame-inducing facade built by pharisees with bricks of legalism/religion—that should be torn brick-by-brick to the ground—so that the people held captive in their own cells can see the freedom that waits beyond.

One thought on “Purity Culture is Bullshit”