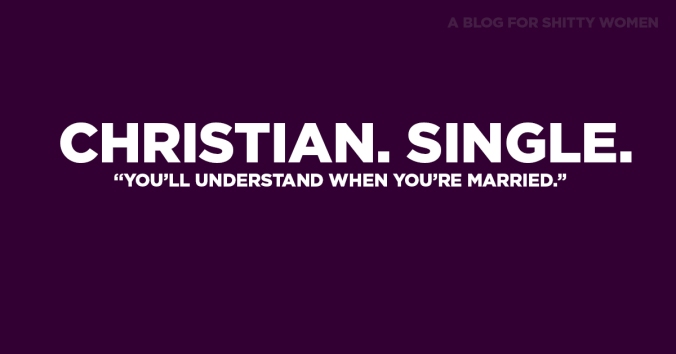 There are approximately 1,350 words beyond this point. This blog will take the average adult reader about four and a half minutes to read.

Raise your hand if you have ever been told a variation of, “You’ll understand [some aspect of Christian life] when you [reach a certain life milestone].”

Consider this blog a part two to Christian. Woman. Single.

As a Christian who is female, and who is also single and without children, I have heard statements like this countless times. They started when I was about eighteen. I’m 31 now, and I heard one of these this last weekend.

I’ve heard it from my well-intended friends. I’ve heard it from people who hardly know me. I’ve heard it from the pulpit. Statements like, “You’ll understand unconditional love when you get married.”—and if that came from the pulpit, it was probably preceded by some sort of anecdote about how the preachers’ spouse did something frustrating, but the preacher was gracious to love said spouse anyhow—and the unconditional love punchline was followed up by mild congregational laughter. From my well-intended parent friends, it probably took the form of letting me know I’d understand the love of God better when I had kids. Often, it’s a response to me speaking about the things I’m learning.

I could never quite figure out why these statements chafed my soul so fucking badly. I wondered if my chapped heart was because of my own pride—or because I’ve been standing alone in a fucking desert.

I am entirely sure my pride factors into this. We can talk about that, too—later. But this is what I’ve come to: It is both. I understand that these statements are well-intended. But I believe wholeheartedly that they are wrong. They are demeaning and hurtful to individuals and the Church.

Many years ago, another friend was teaching me how to coil a cable properly—the over/under technique that production folk use. He stood there for about twenty minutes trying to explain in the way that he understood best—and I could not get this flipping coil thing down. After trying to walk me through the process repeatedly, and me failing every time—he changed his approach. He showed me a different process that achieved the same result. After he showed me this new method twice, I had it down. And it wasn’t just that I could fumble my way through it now—but I could do it well and efficiently right out of the box.

I understand that marriage and children are big life changes, and they involve ongoing learning and growing—I get that. I’m not denying it. I see it in my married and parent friends. And those life situations surely lend themselves better than others to learning certain things about relationships and God. I am wholly willing to admit that. I long to someday experience it. And you can absolutely tell me that I won’t fully understand marriage until I’m married (just like you won’t fully understand singleness in your 30s until you’ve been there). Or you can tell me I won’t understand parenthood until I’m a parent.

But I do not believe that God limits our knowledge of him or relationship with him by marital or parental status. The very thought breeds a tidal wave of hopelessness in my unmarried and childless heart. It says amidst fears of forever-singleness, “You will never know the love of God deeply.” It says my access to the throne of grace is limited. It says I am relegated to the temple court—while married people and parents get to commune more closely with God on the other side of that heavy veil.

It perpetuates the classism within Christendom and once again declares single and childless Christians as less-than. Bush league Christians. It says we couldn’t possibly be at the same “level” of Christianity as married parents because they have more access to God and his characteristics than us single Christians.

When I was a bit younger—in my early and mid-twenties, I was content to be told that I would understand many things better “when you’re married” or “when you have kids”. And as I’ve said, I don’t doubt in many functional ways that’s true—but I’m just not content to be fed that brand of hopelessness when it comes to learning about my Savior God anymore.

There are a plethora of life situations that act as incubators for grace and mercy—for ourselves and others. I honestly cannot even begin to summarize what I’ve learned about grace, mercy, and Jesus by serving as front-of-house audio at my church for the last six years. You want to learn patience? Forget spouses and children. Work with musicians. (Uh. I seriously love you guys with my whole heart, if you’re reading… and you have taught me the Gospel over and over again.) (And yes, I recognize that you could probably say the same thing about me.)

The only references to singleness in Scripture paint it as a good thing. So why does it still feel like a fucking curse within Christendom? And then when the verses about singleness come up in groups and on Sundays, they’re treated like an inside joke that only married people get—spouses nudge each other and chuckle. (You won’t find the single people laughing because it’s not fucking funny to single people.)

I don’t believe God leaves us stuck in our sin and limited in our knowledge of him and his glory because we haven’t “leveled up” yet. This is not Super Mario Brothers. We are not jumping for flags at the end of every level. While the Church may function with a hierarchy of saints, the Gospel of Jesus does not.

Here are my hopes, now that I’ve written through some emotional stuff (for me):

To my single brothers and sisters, we are not hindered in our ability to draw near to God because of our status.