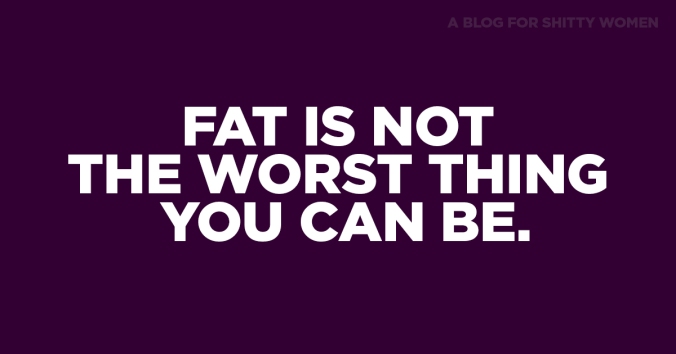 There are about 1,660 words beyond this point. This blog will take the average adult reader about five and a half minutes to read.

Fat is not the worst thing you can be.

It really, really is not.

And if you really stop to evaluate your deepest darkest fear, I think you’ll agree with me. When you delve deep into the fears you harbor that have never escaped your lips—I doubt if “fat” will be on that list.

“Oh my gosh I’m so fat.” she says, as she eats something unhealthy.

“I need to lose fifteen pounds.”  she says, as she denies a treat.

“Gotta lose the beer belly.” he laughs at a party.

“OMG have you seen so-and-so? She’s put on so much weight. It’s unhealthy.” she gossips.

It’s never overtly stated as a fear, but when so many people express their need to avoid it, it seems to amount to that. Those are a few of the many ways I’ve heard this fear of fatness expressed—in my presence. In the presence of your actually obese loved one. Or maybe in the presence of an overweight stranger—who is also loved. END_OF_DOCUMENT_TOKEN_TO_BE_REPLACED

There are about 1,160 words beyond this point. This blog will take the average adult about four minutes to read.

“You’d be a really pretty girl if you just lost a few pounds.”

I’ve heard this countless times in my life. It happened most when I was a cashier at a grocery store. It happens from time to time when I’m just being overweight in public view. It still happens—and I’ve lost more than a few pounds, but am still certainly overweight. I wrote about this in more detail in The way we talk about overweightness needs to change. END_OF_DOCUMENT_TOKEN_TO_BE_REPLACED

There are 1,585 words beyond this. It will take the average adult reader approximately six minutes to read.

I do not believe being overweight is sinful. As an overweight female Christian, however, I can tell you three specific things about my own personal obesity:

I do not believe that the excess weight on my body is actually sinful. However, I do acknowledge the role sin—and this fallen fucking world—has had on my body.

END_OF_DOCUMENT_TOKEN_TO_BE_REPLACED

This blog will take the average adult about four minutes to read.

As you probably know by now, I’m an overweight woman.

I first became self-conscious of my body around seven years old when a friend told me to suck in my gut if I wanted the boys to like me. Photographic evidence suggests I started actually getting chubby around the fourth grade. Once I became aware of how terrible my body was as a child, I started dressing like a boy—because even at that young age, boys’ fashion was more forgiving (and comfortable!) than girls’. It was all baggy pants and baggy shirts for years. With the advent of fleece vests in middle school, I spent much of my life in one of my vests—to hide the midsection, I suppose. In high school it was more of the same—baggy pants, baggy shirts, baggy hoodies—baggy pirate clothes (<- truth).

END_OF_DOCUMENT_TOKEN_TO_BE_REPLACED

So—right after publishing my last blog Why “Shitty Women”? I took a shower, and like you do in showers, had a bit of an “aha” moment about one of the things I wrote briefly about.

Specifically, it was this sentence:
“No one responded to me with the vacant “God’s daughter” and “God thinks you’re beautiful” shite that made no sense to me.”

In its context, you see that I implied that people had used those women’s ministryisms in the past, and that does not seem to be part of my current life. (Praise God.)

Let me give you some context into my life, and how the phrase “God thinks you’re beautiful” has been used by others toward me:

I have not been told that I’m beautiful much in my life.

Stop. Halt. This is another one of those places where I feel like I should tell you to not respond with coddling and “encouragement”. Sit. Put away those feelings of needing to fix it.

Of course, being a female, there’s the occasional “girlfriends” moment where another female tells me I’m beautiful—but, full disclosure: I don’t generally trust those moments. It feels contrived about 97% of the time. We can talk about trust issues later.

I can count the number of males that have called me “beautiful” on one hand—if I was missing my thumb and forefinger. I can count the number of times that a male, who wasn’t my grandpa’s age,  called me beautiful on one finger. (Note: This excludes instances of sexual harassment on the bus and downtown. I’m really talking about times where being called beautiful felt safe and made me feel loved—not the times where I’ve felt objectified and dirty.)

That one instance happened in my junior year of high school, while I was out on a band trip, and a friend of mine—nothing more—was in the elevator with me, turned to me, and said, “Kim, I just want you to know I think you’re beautiful. Inside and out.” and then we reached our floor, and he walked out.

There were times when I recounted this—the fact that I’ve not been told that I’m beautiful much, and the story I just told you—to women I was around, and without ever acknowledging the feelings I might’ve been feeling (presumably because I’m really fucking bad at expressing emotion)—they would respond with “Well… God thinks you’re beautiful.” Sometimes they might even put the lye-soaked cherry on top with, “and I do too.”

And I would realize that once again my feelings and experience had been dismissed, and that the conversation was over for me. It kind of felt like I was saying, “Excuse me, I have a gaping wound.” and the response was my friend soaking a bandage in lemon juice, rolling it in salt, and applying it to the wound.

In my shower after writing that last blog, as I was all snot and tears and full of fear from writing those words, it hit me: What a terrible fucking invitation to idolatry.

No wonder those words were never comforting to me—because they were rooted in the idol of beauty—an idol that I hated but could never escape. An idol, that for years has spewed at me, “You are not even worthy to worship at my feet.” An idol that I simultaneously railed against, and hated that I railed against it. An idol that I planted my feet against, held up both middle fingers, and worshipped the fact that I didn’t worship it.

Now, I don’t want to dismiss all beauty as idolatry—I believe, in the words of Levi the Poet, that “beauty pulls me beyond myself like I don’t even have a choice, so I know I don’t believe in nothing.”—that God himself is the very definition of beauty, and that every echo of beauty we see in this world is a refection of the divine image.

And I’m certainly not saying being beautiful, or wanting to look beautiful (by whatever standard) is sinful. But that the temptation to worship beauty, instead of the Beautiful One, is real, and prevalent.

The response to the story I told those women to be, “Well… God thinks you’re beautiful…” is nothing short of an invitation to idolatry. It thrusts the notion of beauty back into my hands, onto my body, as though it ever belonged there to begin with—and says nothing to Christ’s beauty. It says that God is concerned with making me beautiful—rather than slowly changing me into a better reflection of His beauty.

Rather than Him. His glory. His beauty.

The only reason God the Father might look down on me and see any amount of beauty whatsoever is because He created me in His image, and I am clothed in the beauty of His son. None of the beauty He sees when He looks at me is my own. It is all—ALL—His.

It is my hope that in all things I might reflect His beauty—I know it’s not the case right now—but I also know it will be someday in eternity. I often think about this when I’m downtown during the sunrise. From downtown Seattle, you can’t see the sunrise, because there’s a large hill to the east—but you can see it reflect in the distorted and often dirty and fog-laden windows of the skyscrapers.

I want to be that distorted dirty window that reflects the beauty of the sunrise for others to see when they can’t see the sunrise for themselves. And I believe that one day He’ll make me perfectly clean to reflect that beauty back to its rightful owner.

Rather than trying to reassure other women (and men) that they are beautiful—or that God thinks they’re beautiful—perhaps we should remind them of Christ’s beauty. It is beauty that doesn’t expire with age and gravity. It is far longer lasting (eternal), and more faithful than the sunrise itself.

“The Christ I see in you is beautiful.” is a far higher compliment.