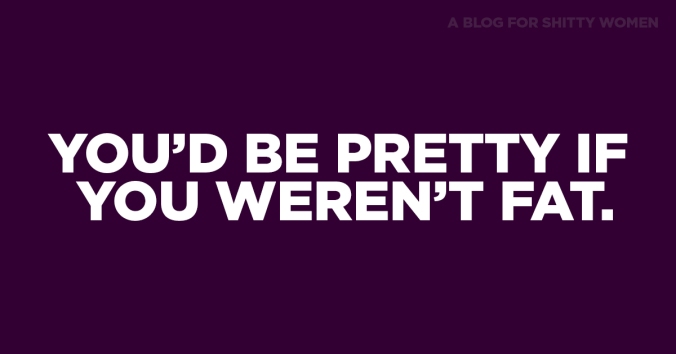 There are about 1,160 words beyond this point. This blog will take the average adult about four minutes to read.

“You’d be a really pretty girl if you just lost a few pounds.”

I’ve heard this countless times in my life. It happened most when I was a cashier at a grocery store. It happens from time to time when I’m just being overweight in public view. It still happens—and I’ve lost more than a few pounds, but am still certainly overweight. I wrote about this in more detail in The way we talk about overweightness needs to change.

It is still shocking every time it happens. Every time—it’s like a tsunami of anger filled with debris and shrapnel called despair and lies crashes into me. My gut reaction is to be a sarcastic asshole. On more than one occasion I’ve responded to this with biting and cruel sarcasm. My penchant for words and language comes with a dark side—I am good at crushing people with words. And until very recently (and still sometimes), my reaction was always to respond to being crushed with crushing. I still have not mustered the strength to respond to these comments in love—but I have learned to not respond externally.

My friend, however, told me a story of a moment that she—I believe by the power of the Holy Spirit—managed to respond with grace, and she has allowed me to share her words here:

If you see me before 10 am, you know I have a coffee ritual. Several Wednesdays ago,  I had to order old school – you know, I had to stand in line, wait for my turn to order my drink with the barista and wait for my drink to be made. While standing in line and wondering what commute conditions would be like, an older woman, probably nearly 70 years old, met my eyes with an endearing smile. I smiled back and leaned towards her when she began speaking.

This was a familiar exchange, one like I’ve participated in at least a couple of hundred of times while waiting in line. But, unlike most, I was surprised by the boldness of the words that spilled from the women’s pale pink lips. “You’d be so beautiful if you weren’t so overweight,” she said. Her words kind of stunned me, except my mind immediately rolled through a mental Rolodex of stories like this I’ve heard through lots of female friends. Even still, it kind of shocked me that she opted to invade my world with those kind of thoughts that are hard to believe that people think them, let alone feel compelled to say them aloud.

Before I had the chance to respond to the woman, the barista at the bar armed with our drinks called our names, one after the other, like role call. As we reached for our beverages, I asked her if she had a few minutes to chat. She said she did, so I led us to a table for two.

I began to tell her my story. I told her a little of my childhood—how growing up, despair felt like my closest companion. And how most days, I felt invisible and unknown. I told her about how my dad struggled through deep depression and bouts of mania, suicide attempts and hospitalizations, and the consequent guilt and shame. And that even several times throughout my childhood my siblings and I awoke to hearing violent struggles, or my dad urging us to put shoes on so he could drop us off at an orphanage. I told her about my mom who had left when I was three and, until years later when my dad was found dead on the bathroom floor at a Chicago university, didn’t look back. I told her about my despair—believing I didn’t matter to anyone—because I didn’t even matter to my parents. I told her how it felt like I was suffocating, and I also told her about what my journey was like to know I did matter. I told her about my children, and how despite the tremendous odds of it all, I made it out intact, and my boys have made it far further than even I—and that I considered myself blessed and well loved because of it. I also shared with her about the work I get to do now, and how I am so convinced that there is life after significant trauma and pain I’ve entered into some of the darkest places others have faced—and it has made a difference.

It was not long into my story before tears streamed down her cheeks like quiet streams that carve into the landscape of their nearby terrain. Soon, she extended her age-spotted hand and placed upon mine. I reciprocated, and instantly the texture of her skin flooded my mind with memories of my late grandma who I’d spent significant time with when I was young and my dad was hospitalized. Several times, she interrupted my story, with sentiments of regret for the things I faced as a freckled little girl. I thanked her and asked to continue.

“My body is overweight,” I acknowledged. “But it has served me well. It has carried me through a tremendous amount in my life, and so, for that, I can be thankful.” Her lips glistened, wet from her tears. She told me that I was one of the most beautiful people she ever knew and that she wished everyone had a body as courageous as mine.

These fallen bodies are a result of the fall—in many ways. I wrote more expansively about that in the blog Obesity and Sin. But they are not outside of the sovereignty of God. My body is not somehow separate everything else in life that falls under the purview of His sovereignty.

My body—and the treatment I’ve experienced because of the body I live in—have played incredibly huge roles in how I’ve developed into the woman I am now. Without this body, I would not have this me. Very honestly, without this body, there is no A Blog for Shitty Women—I know I write about other things, but starting an honest conversation about being an overweight woman in the church is where it all began in my head and heart.

Would I love to be that pretty thin woman that the world wants me to be? Yes. Do I often grieve that I’m not? Yes. But I would rather be the woman I am now—the one that God meticulously designed for this life.

“My body is overweight, but it has served me well. It has carried me through a tremendous amount in my life, and so, for that, I can be thankful.”

One thought on “You’d be pretty if you weren’t fat.”